Home Features Can A Regulatory Crackdown Boost the Digital Economy? China Is Betting On... 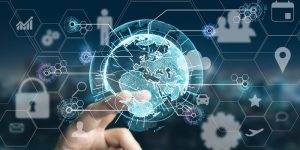 This year, Beijing has continued its ongoing crackdown on fintech firms and digital payment companies. Yet, by all metrics, the nation is still leading the world when it comes to the digital economy: China is now on track to pull in more than $2 billion in fintech investments annually according to KPMG, and it leads the world in fintech adoption by SMEs.

How has China maintained such a hot fintech market despite a level of regulation unheard of in other markets? Its 87% penetration rate of fintech services certainly has something to do with it. Even outside major metropolitan hubs of fintech innovation, digital payments that skip credit cards entirely have become de rigueur across the nation — something that would likely not be feasible without a powerful central authority helping proliferate necessary network infrastructure.

Naturally, China has no intention of resting on its laurels. According to its most recent five-year plan, Beijing seems eager to continue to flex its muscles to boost its digital economy still further, setting up green data systems even as it doubles down on its policy of heavy regulatory oversight of the industry.