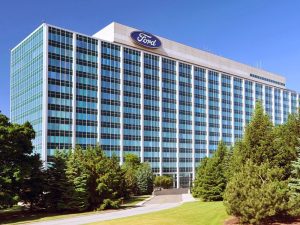 For the millions of U.S. workers who commute by car, the time spent driving to and from work represents a waste of potential economic activity. But what if previously unusable time behind the wheel could instead be used to pay bills, order groceries, or buy fuel for their electric vehicle? All that may be possible sooner than expected thanks to a new partnership announced between auto manufacturer Ford and digital payments firm Stripe.

According to Stripe’s Head of Global Product Sales and Payments Performance James Dyett, the five-year partnership is intended to facilitate a “seamless digital and eCommerce experience” for Ford drivers. Essentially, the partnership will allow for the integration of Stripe products into new Ford cars, allowing for a fast and frictionless purchasing experience from anywhere on the road.

If the new Ford–Stripe alliance is successful at capturing the mobile payments space on the road, both companies stand to make considerable gains, with experts predicting transactions made during commute times could approach a quarter of a trillion dollars. As a sign that the companies are taking this step toward cars-as-tokenized-wallets seriously, Ford dealers are already planning to accept reservations for new Ford F-150 Lightning vehicles through Stripe Connect.