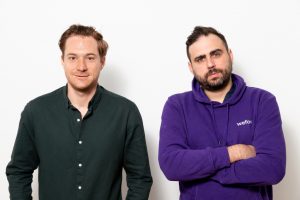 German insurtech Wefox is shaking up the $5.2 trillion insurance industry by pulling it out the pre-internet era. Launched in 2015 by CEO Julian Teicke and founders Fabian Wesemann and Dario Fazlic, Wefox is today considered one of Europe’s most promising unicorns, and the first digital insurance company to reach profitability as of 2020. Adding to its list of achievements, the company has also just raised a record-breaking Series C round.

Since launching, Wefox set out to be a digital insurer that specializes in personal insurance products over a range of services such as household insurance, motor insurance, and personal liability insurance. What sets Wefox apart from legacy insurance companies is its strong belief in maintaining a model where agents sell the insurance products, instead of opting for the now popular direct-to-consumer model. The startup firmly believes that agents are here to stay and is supporting this by having 700 agents on its team selling its products exclusively. On top of this, Wefox partners with around 5,000 associate brokers who can distribute Wefox products.

Notably, Wefox has found its success in offering digital tools that aid its agents in streamlining and automating labor-intensive processes - mitigating the hurdle of having agents. The company’s advanced data analytics is enhanced by the capability of automating over 80% of customer transactions. This results in Wefox having the benefit of processing claims far more quickly and cost effectively than established players, making it a formidable competitor in the space. It has been shared that the company is also putting together an AI team in Paris to work on a prevention model.

Its recent Series C round raised $650 million, elevating the post-money valuation of Wefox to $3 billion. According to Teicke, the round eventuated incredibly quickly. The round was supported by almost all of the company’s existing investors such as OMERS Ventures, G Squared, Mountain Partners, Merian, and Horizons Ventures. New participants included FinTLV, Ace&Co, and LGT.

The company has shared that it aims to increase revenues to $350 million this year from $143 million the previous year. It will continue to build a branded sales team and product portfolio.